Now I know in the last of these posts I said “Same time tomorrow?” – but things happened. In fact, the last few days of the tour were so busy that I’m now writing these retrospectively from back in the UK, but it’s all still very fresh, so I’ll continue with the story.

The night out after the Leipzig gig ended up very late. So I didn’t get to sleep until about 4, so waking up on day 8 at about 11 still seemed very early, but I had much to do. We didn’t’ have to check out of the Airbnb until 3pm and we don’t need to be in Chemnitz (which is only about 90 minutes away) until 7.30, so there was plenty of time. Joe went for a run and then we went and got some breakfast from Netto again. We both spent a few hours catching up on our admin and I did some rearranging of my bags and the back of the van to try and make life a little bit easier for myself for the last few days.

At 3pm we left the Airbnb and walked back into the centre of Leipzig to have a better look around. The centre really is fantastic. There’s so much to see and lots of pretty looking buildings both old and new. We only had a couple of hours, but we certainly saw a lot of it, even if we didn’t always know what we were looking at. In the age of google, we were being quite lazy, but my brain was still pretty fried from the night before, so I was happy just to take in the scenery without learning about anything. Although I did read one thing about the Monday demonstrations that took place in the main square in the late 80s that were a key part of the breakdown of the old system, so it’s also got an important place in history. 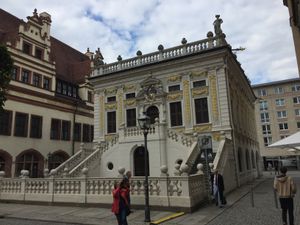 They say that Leipzig is the new Berlin and a lot of people who can’t afford Berlin rents are now moving here, which is in turn causing Liepzig rents to rise rather rapidly, but it’s easy to see why people would want to be here. I took more photos as we walked around than I had in any other place that we’ve been to so far. 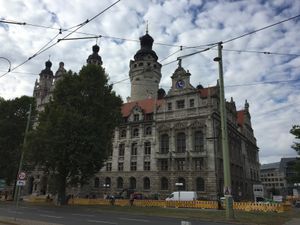 At about 5, we were back at the van and started our journey to Chemnitz. It was quite a nice drive where we appeared to be going cross-country via minor roads rather than using the autobahns, the weather was great, so it was a good time to be driving through the countryside. We listened to James Taylor. Every had been telling me that Chemnitz is not the nicest of places and there’s not much to see there, in fact most people were saying quite nasty things about the place, so my expectations were low, but I’ll be honest, I found the place really charming. We parked up near Coffee, Art, Bar, our venue for the evening, which is a small café bar in a shopping centre complex in what appears to be the centre of town. We head in and meet Martin who runs café and he gives us a nice big welcome. I was close to wetting myself again (this seems to be a theme as I’m getting older), so I had to cut our little chat short to use the bathroom. but I did notice that the walls appears to be industrial grey stone slabs. I thought this was pretty cool, but then realised that it was in fact a wallpaper that was making it look this way which I liked even more. It looked legit and gave the place a really good vibe. I also like that the stage had a thick and fluffy carpet.

We dropped our stuff off and then we went to briefly explore Chemnitz. Martin told us that the only thing that’s worth seeing is the giant statue of Karl Marx’s head so we headed there. It really is quite a statue, possibly the biggest head I’ve seen. We then went to go and look for food, but whilst doing so stumbled upon some other cool statues and some old buildings which were really interesting. One was a church tower and the bells were ringing out playing a melody of some sort and we seemed to be the only two people paying any attention. There were no signs of any other tourists! The sun was shining and I’m of the opinion that everywhere looks good when the sun is shining, so I think I definitely saw the best of this city. 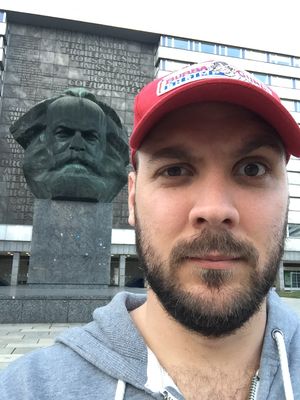 I grabbed a cheap pizza and then headed back to the venue and got my laptop out. Did some work for about 30 minutes and then set up. I went on stage at about 9pm. There were about 15 people in the room and I’m not sure that many of them were that bothered by what I was doing when I started, but I got a nice applause at the end of the first two songs. Half way through my third song I looked right to see that a group of my good friends from back home (the band Room 94 who were on their way to Poland for their own tour, and Nick Kent who was driving them and helping them out on tour) were looking in and making their way to the door. They’d decided to surprise me by detouring on their own route through Europe to catch this gig on their night off. They came in and were excitable and it was a really great surprise to see them. The rest of the set was wonderful as I had this small group singing along and making it look like I was popular to the locals who were in there. I think I raised my game a bit once they walked in as I was so pleased to see them. 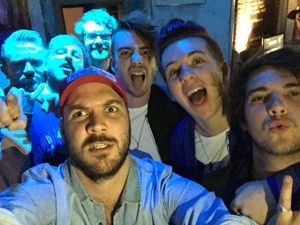 At the end of the set I went and gave them all a big hug and we shared the first of a few beers that we'd have that night. Martin was supplying me with beer which I was very grateful for. Nick was getting bloody mary shots too, which were definitely interesting! The lads brought a couple of items from me, but none of the other locals seemed to want anything, but they did seem to have enjoyed themselves watching my set.

We watched Joe’s set and then carried on our catch up and drinking. It was a really wonderful night. I’d not seen the Room 94 lads in a while, and I pointed out to Nick that in all our years of close friendship, we’ve never been in a country outside of the British Isles together. I had such a great night with these guys, they're great friends and having us all together in another place was a real sweetener. Especially as they'd detoured just to be here. Thank you! Martin took a nice photo of us all as well, the bloody mary shots had clearly got to Nick. 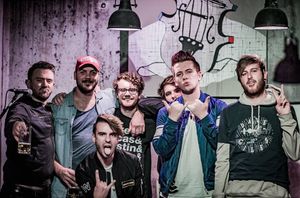 Martin came and gave us the contents of the hat which he had collected for us, it was 75 euros, but I’m pretty sure that he had topped this up generously himself. He again apologised that there weren’t as many locals in as he would have liked, and he seemed thrilled that some people had traveled to come and see him. He’d been taking some photos of the night and they’re pretty damn good. Martin was also putting Joe and I up in his flat for the night, so at about 1, the boys left the bar and Joe and I headed back with Martin. Once in the apartment, all I wanted to do was sleep. It had been a long day, but a good one, and with the knowledge that we’re heading to Berlin early to spend a full day being tourists, I wanted to get as much sleep as possible.